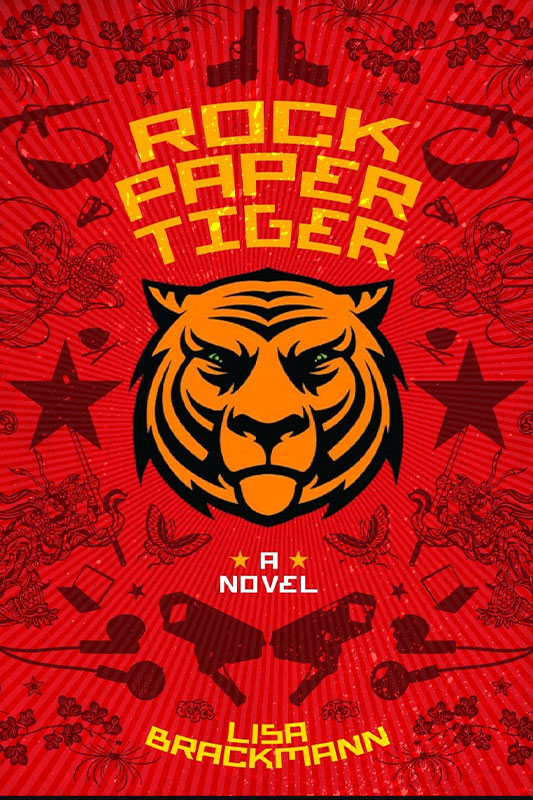 Iraq vet Ellie McEnroe is down and out in China, trying to lose herself in the alien worlds of performance artists and online gamers. When a chance encounter with a Muslim fugitive drops her down a rabbit hole of conspiracies, Ellie must decide who to trust among the artists, dealers, collectors and operatives claiming to be on her side – in particular, a mysterious organization operating within a popular online game.

“Lisa Brackmann’s ROCK PAPER TIGER is a compelling debut that takes you deep into the dangerous, complicated heart of modern China, with a tough and appealing heroine in Ellie McEnroe.”
– Jeff Abbott, FEAR, COLLISION, TRUST ME

“Rock Paper Tiger” is a splendid debut novel by a gifted new writer. Her Chinese setting is exotic and chilling, and the characters live and breathe. The story is smart and fast as a sports car. Keep an eye on Brackmann. — T. Jefferson Parker, THE RENEGADES, IRON RIVER

“A terrifying odyssey in present-day China, running through the political capital, Beijing; the coal mining capital, Taiyuan; the ancient capital, Xi’an; and the Three-Kingdoms capital, Chengdu; not to mention the capital of the post-modern Great Community, the computer game, with the protagonist pursued by the Chinese and American governments alike in a global panorama. A totally captivating page-turner with vivid, first-hand details and nuanced multi-cultural facets.” –Qiu Xiaolong, THE MAO CASE, DEATH OF A RED HEROINE

“Few writers would be up to the challenge of blending the worlds of urban China , Iraq , and a virtual online kingdom–but Lisa Brackmann wildly succeeds. Prepare to taste the smog, smell the noodles, and rub the Beijing dust between your fingers. Rock Paper Tiger is a fresh and vigorous work that vividly captures the roller coaster that is life in modern China .” –Eliot Pattison, THE SKULL MANTRA

ROCK PAPER TIGER is an example of my “magpie” method of plotting – take a bunch of unrelated things swirling around in the ether and see if I can somehow make them go together. This is how I ended up with a novel involving the Chinese art scene, the War on Terror, fugitive Uighurs, online gaming and the Iraq conflict.

What holds it all together is Ellie Cooper nee McEnroe, a former National Guard medic whose own vulnerabilities endanger her nearly as much as the various operatives, spies and conspirators on her tail.

The “Great Community” in ROCK PAPER TIGER is in part a nod to the ideas of Qing Dynasty reformer Kang Youwei. In spite of his support for the Qing Empire, Kang was at heart a cosmopolitan, and a strong believer in democratic government. His more radical writings preach the virtues of the “Great Community,” a utopian one-world state which was supposedly inspired by Confucius’ Book Of Rites. However, in Kang’s Great Community, Confucian hierarchy would be abandoned in favor of sweeping egalitarianism, a society where private property was eliminated and with it all forms of class distinction. In particular he passionately advocated the equality of women. Arranged marriages would be abolished. In their place, Kang recommended one-year marriage contracts that could be renewed or not depending on how things went. Kang advocated such arrangements between same sex couples as well.

For more information on Kang, check out his Wikipedia entry, which comments: “Notable in Kang’s Da Tong Shu was his enthusiasm and belief in bettering humanity with technology…He believed that Western technological progress had a central role in saving humanity. While many scholars of his time continued to maintain the belief that Western technology should only be adopted to defend China against the West, he seemed to full-heartedly embrace the modern idea that technology is integral for advancing mankind. Before anything of modern scale had been built, he foresaw a global telegraphic and telephone network.”

One of my favorite murals in Eureka. Finally caugh